“Hi Tom …I was very keen to buy Canon G6 , but as now out of production & very difficult to get hold of , even second hand . The G7’s reviews are mixed especially the absence of RAW [file support]. Do you think this is a big disadvantage , is it something an amature would have much use for ? What are your views of the G7 ? Your photos on your website look great , do you use a Polariser filter to get the colour contrasts ? Particularly enjoy your trekking photos in Switzerland.”  — Regards, from Tony Lord February 6, 2007
[ Information here dates from 2008 for people interested in older cameras. Click BUY > CAMERAS to see the latest recommended gear. ]

Tom Dempsey replied as follows including new information as of February 2008:

Image on right: Snow & ice saucers formed on rocks in Commonwealth Creek, Alpine Lakes Wilderness Area, Washington. Commonwealth Basin makes one of the best snowshoeing trips in the Snoqualmie Pass area along Interstate 90.
A tiny camera such as the Canon SD700 IS ELPH is easy to keep warm in your pocket to capture winter snapshots while snowshoeing or skiing. The Canon SD700IS also lets us record movies of our tango dance instructor (with permission) to remember the steps. It handily records pictures of different flooring, cabinet, and lighting designs as we comparison shop for our kitchen remodel. My wife Carol likes to keep this tiny Canon ELPH (about the size of a pack of playing cards) handy in her purse or daypack for capturing images that inspire her quilting designs. 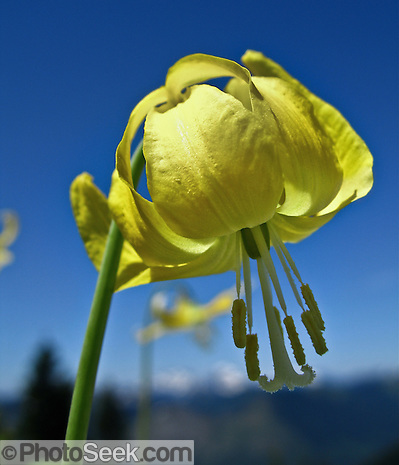 Above left: A glacier Lily on Johnson Ridge in late June, on the hike to Scorpion Mountain (9 miles, 2900 feet round trip), a hike in Mount Baker-Snoqualmie National Forest, accessible from US Highway 2 near Skykomish, Washington. Digital cameras like the tiny Canon SD700 IS have great macro abilities.
Good luck with your photography. 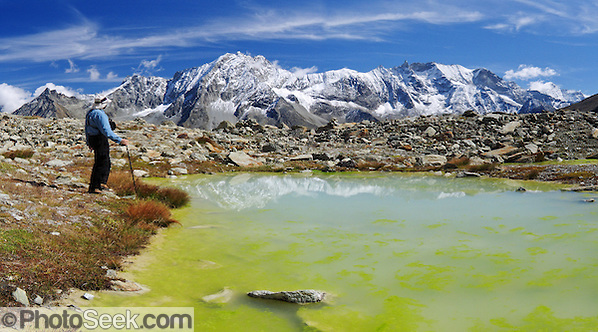 Above: Striking yellow algae in a tarn reflecting Les Dents des Veisivi, above the Arolla Valley, Switzerland. On this day we hiked about 8 miles (2900 feet up, 3300 feet down) from Arolla to La Gouille, then we bused to our hotel in Les Haudères. Published in Ryder-Walker Alpine Adventures 2006 & 2007 “Inn to Inn Alpine Hiking Adventures” Catalog. Photographed with a Canon Powershot Pro1 camera.

“I just discovered your website and viewed all of your Alp hike pages. I have to go back!!! My wife and I stayed in Gimmelwald a few years ago and did some hiking, but it was in march and in the snow and low clouds. Thank you for posting your wonderful pictures of one of the greatest and most beautiful areas in the world. I sent the linkto my Wife (who grew up in Europe and spent many holidays in the Alps) and I know she will be home sick. (which means a trip soon!) Thanks again, you are a very talented Photographer.”