Your eyes see deeply into shadows and highlights which most cameras unfortunately render too dark or bright by default. Many cameras made after 2008 can alleviate common contrast problems in JPEG shots if you know how turn ON their special mode for highlight, shadow, contrast, or dynamic range (named differently by brand):

But you’ll control tones much better by shooting raw file format and adjusting specific areas of the image as needed, using Adobe Lightroom‘s digital Graduated Filter or Adjustment Brush as explained in Parts I and II below.

When you shoot landscape images on JPEG or film, a glass neutral-density graduated filter is often required to balance bright sky with dark foreground. Raw files now digitally replace the glass graduated filter. Compared to JPEG shots, raw files have at least 16 times the color depth per pixel and expand recoverable dynamic range by 2 to 3 stops in APS-C sensor cameras, like magic (or by only half a stop using small sensors, such as in a 2008 Olympus E-30 camera with Micro Four Thirds sensor.)

If your camera shoots raw files, adjust tones manually in your raw converter software such as: Adobe Lightroom, Apple Aperture, Adobe Photoshop, free FastStone.org editor, or raw file software provided on your camera’s CD/DVD. Lightroom has revolutionized my photo workflow speed and organization. Learning is best “hands on.” Download a free trial copy of Lightroom from Adobe.com. Then Import your own landscape image with sky and dark foreground, and play with the steps below. Learn Lightroom within a few days. Buy Adobe Lightroom here to support my work. Or students, teachers, and school staff can get cheap academic discount through Adobe.

The following three Figures illustrate how to adjust image tone and apply a digital Graduated Filter or Adjustment Brush in Adobe Lightroom version 2.3. Other photo editing programs can do some of this, but Lightroom boasts tools which are better, quicker, and nondestructive, with Undo to any step of the photo’s edit History database.

Figure 1 shows the original image as shot and saved in raw file format (Nikon .NEF file with 12-bit color depth per pixel). Notice the colorful histogram in the upper right of the Develop module of Adobe Lightroom version 2.x. The histogram data piles up against the far right, indicating that the whitest and brightest areas of the image are overexposed and truncated. Luckily on 2009 DSLR cameras, raw files let you recover 1-2 stops of overexposure (and up to a stop of shadows).

Click the Auto Tone button (circled in pink in Figure 2 below) for a quick fix. Auto Tone automatically adjusts the sliders for Exposure, Recovery, Blacks, Brightness and Contrast.

If you don’t like the automatic result of  Auto Tone, choose Edit>Undo (or CTRL+Z in Microsoft Windows) (or Reset All for that image in the Library module), then adjust sliders individually. To be more precise, move the Exposure slider leftwards (to darken) and/or the Recovery slider rightwards to recover the data in the overexposed areas (which would have been irrecoverably truncated if shot as JPEG). In this image, increasing Recovery to 23 and decreasing Contrast to 18 recovered all of the truncated highlight data. Also, blacks were darkened from 5 to 12. Mid tone Brightness was shifted darker (from 50 to 46). 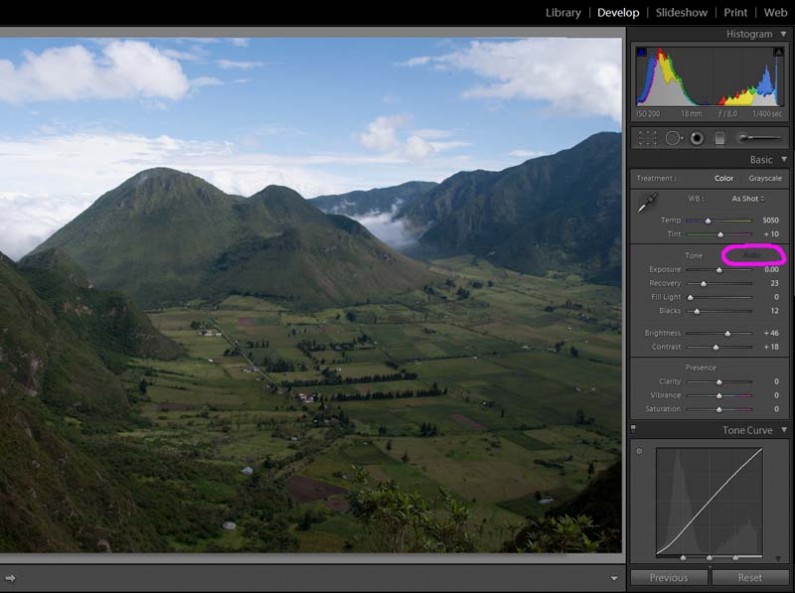 Compare Figure 2 (above) with Figure 3 (below) to absorb the gist of this article without needing to read everything. 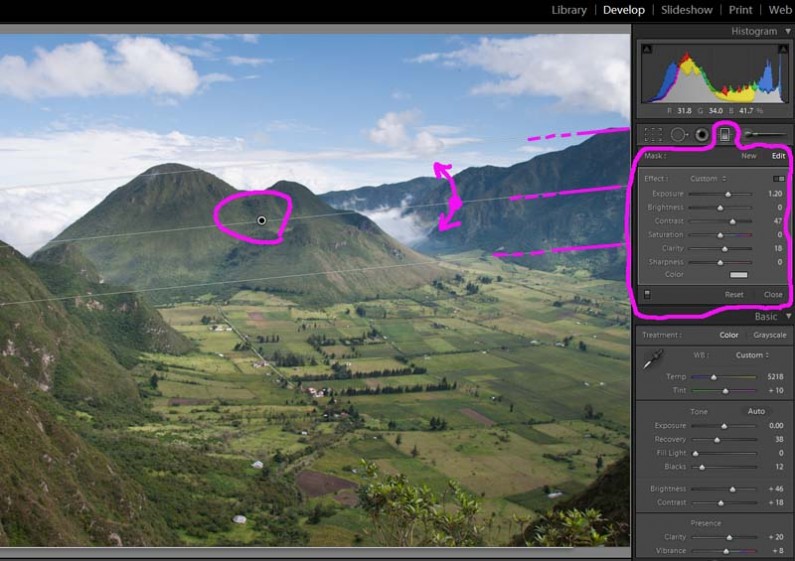 Figure 3:  Add a Graduated Filter in Develop module of Adobe Lightroom version 2.x. Brighten the foreground (on the lower two thirds of image) by adjusting Graduated Filter sliders as follows: brighten Exposure to +1.2 stops, Contrast to +47, and Clarity to +18 (which can be set before or after drawing the Graduated Filter).    National park of Reserva Geobotánica Pululahua, a dormant volcano north of Quito, Ecuador.

Figure 3: draw the Graduated Filter and adjust its tonal sliders

Click the Graduated Filter tool icon just below the histogram (shown boxed in pink), or press G. A box will drop down a set of six sliders as shown (or buttons). Toggle between slider mode (much preferred) and +/- button mode by clicking the light/dark pair of squares just below the word “Edit.”

Drag to draw the transition area of the Graduated Filter onto the image. Where you first click the mouse is zero effect, and the point where you release the mouse button after dragging is 100% filter effect. Three parallel hairlines appear on the image showing the starting, middle, and stopping points from your mouse drag.

Hovering the mouse over the middle hairline (away from the center dot) turns it into a curved double headed arrow which allows grabbing and rotating the Graduated Filter, to align with the mountain horizon. To shrink or enlarge the transition area of the Graduated Filter, grab the top or bottom hairline and drag. You can grab and drag the middle line’s center dot (circled in pink) to move the whole filter.

You can add multiple Filters to the image (just like Layers in Photoshop but easier). To modify settings of each filter, you must first select the center dot which turns black (indicating selected/active). Delete key will remove a selected filter. The filter’s center dots only appear when the mouse hovers over the image area, and disappear when hovering outside. Warning: pressing H once by mistake toggles the appearance, or confusing disappearance, of the dots marking locations of Graduated Filters; press H again to restore appearance.

If the straight line of the Graduated Filter tool doesn’t line up correctly with parts of image, instead use the more flexible Adjustment Brush, which looks like a paintbrush and can draw your “filter” (mask) to any shape! Use the mouse scroll wheel (if any) to quickly change the brush size. To erase previously Brushed areas, hold down the ALT key while drawing, which makes the circular cursor label change from + (plus) to – (minus). To see a red mask indicating the affected area that you drew for the Adjustment Brush, hover the mouse pointer over over its active black (selected) dot, or toggle with the O key.

Part II: How to apply a digital graduated filter in Adobe Photoshop or other software

Cut your editing time by more than half by using Adobe Lightroom as above, instead of Adobe Photoshop. No need to read onwards.