The striking natural beauty of the state of Hawaii has attracted me six times, and I will gladly return. The islands of Hawaii, Kauai, and Maui offer some of the best hiking experiences in the world. Our latest Hawaii trip was 2017 Jan 16 – Feb 6, visiting Oahu, Kauai and the Big Island.

Click here to reach my “USA: Hawaii: Favorites” Portfolio gallery to Add images to Cart (to buy Downloads, Prints, or Products such as canvas wraps or picture puzzles).

Our biggest excitement in Hawaii 2017 was seeing lava jetting into the ocean and exploding:

Click here to reach my Oahu Portfolio gallery to Add images to Cart.

Click here to reach my Kauai Portfolio gallery to Add images to Cart.

The 11-mile Kalalau Trail is one of my favorite backpacking trips in the world. The trail crosses five valleys and ends at Kalalau Beach, blocked by sheer cliffs (or Pali, in Hawaiian). Thankfully, State permits limit the number of overnight hikers to this wonderful area. You can also find greater solitude in the off season (non-summer).

The Na Pali Coast is so spectacular that noisy flight-seeing helicopters fly over steadily, within earshot for over half of all daylight minutes. Hikers should adjust their expectations accordingly for this steady onslaught to the ears. Admittedly, I have flown over Kauai in a helicopter twice and affirm that the views are truly astounding, including full circular rainbows. However, the views will have more personal, intimate meaning when you invest “sweat equity” by hiking or kayaking. (Zodiac boats are not allowed to drop off or pick up hikers on Kalalau Beach — you must earn this experience by backpacking.)

Waimea Canyon, the “Grand Canyon of the Pacific,” is mostly a State Forest Reserve, open to hiking as well as hunting for invasive feral pigs.

“The Big Island” of Hawaii

Click here to reach my Big Island of Hawaii Portfolio gallery to Add images to Cart (to buy Downloads, Prints, or Products such as canvas wraps or picture puzzles).

Humans first populated the Hawaiian archipelago on the Big Island, around 300-600 AD. Polynesians bravely canoed here from the distant Marquesas Islands and later from Tahiti. Using large catamaran-like canoes with coconut-fiber sails, Polynesians became some of the finest sailors in history. Early residents left rock pictographs, used simple tools and irrigation, lived in relative harmony with nature, fought wars with each other, and passed down a proud culture through stories and songs to future generations. British Captain James Cook would not discover the Hawaiian Islands, which he called the Sandwich Islands, until a thousand years later, in 1778.

The Big Island is geologically the youngest island in the 25-million-year-old Hawaiian chain — in fact it is still being created! Lava flows have blocked the Chain of Craters Road, and molten lava pours regularly into the Pacific Ocean. You can actually watch the Big Island grow. UNESCO has honored Hawaii Volcanoes National Park on their list of World Heritage Areas. 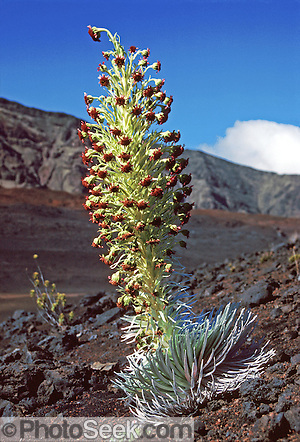 Backpacking in Haleakala National Park on Maui is one of my favorite experiences. Haleakala visitors can also day hike, ride horseback, bicycle, and drive through the fantastic scenery and rare ecosystems of this 10,023-foot dormant volcano. Bicyclists can coast down 10,000 vertical feet on the 40-mile road from the summit of Mount Haleakala. Commercial operators offer supported bicycle descents.

As you hike or ride horseback across Haleakala Crater, the dry moonscape turns into a lush green cloud forest over just 6 miles. The crater forms a bowl 7.5 miles long and 2.5 miles wide, and its floor averages 6700 feet in elevation. With a National Park camping permit, you can sleep overnight in the crater in your own tent. Or reserve one of the three cabins by lottery. Morning mists drift through the cinder cones in Haleakala Crater and often evaporate by mid-afternoon.

See the official bird of the state of Hawaii, the Nene (or Hawaiian Goose, Branta sandvicensis) grazing in and around Haleakala Crater, especially near campsites (but please keep them natural and don’t feed them). The nene (Branta sandvicensis, or Hawaiian goose) is endemic to the Hawaiian Islands and is the official state bird. Nenes are found in the wild on the islands of Oahu, Maui, Kauai, Molokai and Hawaii (the Big Island). Nene DNA indicates that the species evolved from the Canada goose (Branta canadensis) which likely arrived in this archipelago about 500,000 years ago, shortly after the volcanic Big Island emerged from the sea.

Related to sunflowers, silversword plants (Argyroxiphium genus) grow for up to twenty years before a blooming with a huge flower stalk between May and November. After just a single gigantic bloom, the plant dies. In Haleakala Crater, the fascinating native silversword plants are endangered by feral goats. Silverswords grow only on Maui and the Big Island.

Search for latest “Hawaii travel books” on Amazon.com (look for updates every 1 to 3 years).