During my third visit to Peru (June 19-July 18, 2014), our family group of eight Dempseys trekked vigorously 10 days Around Alpamayo in the Cordillera Blanca and 9 days on the spectacular Cordillera Huayhuash Circuit, in the Huaraz area, Andes, South America. We prepared for the breathtaking altitudes with three day hikes of acclimatization out of Huaraz: 1) Callan Punta (in the Cordillera Negra), 2) Lake Churup, and 3) Lake 69. The tough itinerary was rewarded by memorable images shown below.

The Andes climate is generally wonderful for trekking in the mountain dry season from May through September. Days are about 65-70 degrees Fahrenheit, nights about 38 degrees, with frequent morning frost if the night was clear. Encounter fewer fellow travelers in May or September, when weather is also good. Coastal Peru, including the megalopolis of Lima, has a climate opposite to that of the mountains: a short summer of sunny, sticky days from January to March, followed by 9 months of gray mist called the garua. Coastal Peru is one of the driest deserts on earth, watered only by rivers descending from the Andes. As mountain weather often differs from nearby cities, get a better forecast at: www.mountain-forecast.com

We booked our treks of 2014, 2003, and 2000 directly via e-mail and wire payment using the excellent Peru-based trekking company Aventura Quechua. (See my earlier article PERU 2000, 2003.) Our group enjoyed their good food and confident leadership on tenting treks with guide, cook, and arrieros (donkey wranglers). Experienced, flexible trip leader Dante successfully guided our 22 days of hiking in 2014.

Peru is one of the best exotic travel bargains from the USA (much closer than Nepal). Visitors from the Americas will have little jet lag to Lima because Peru Time (PET) equals Eastern Standard Time (EST) without a Daylight Savings shift.

Around Alpamayo in 10 days, Cordillera Blanca 2014

We walked for 10 days Around Alpamayo in Huascaran National Park, as high as 15,950 feet or 4830 meters elevation at Caracara Pass. (A side trip to Punta Union Pass reached 15,600 feet in better weather than the rainy day of our Santa Cruz Valley Trek in year 2000.)

Cordillera Blanca is the highest tropical mountain range in the world, reaching 22,205 feet at the top of snowy twin-peaked Huascaran. In 1985, UNESCO listed beautiful Huascaran National Park as a World Heritage Area, a label for special places worth seeking worldwide.

Trekking around the stunning Cordillera Huayhuash requires altitude acclimatization and good physical fitness. We averaged walking about 9 miles and 2000 feet up/down each day in good weather. Donkeys carried gear and arrieros (donkey drivers) set up camp ahead each day, leaving us to carry light day packs. We crossed many passes over 15,000 feet in elevation above sea level reaching as high as 16,500 feet. The scenery and thin air took my breath away!

Cordillera Huayhuash is currently a Reserved Zone, which recognizes the rights and traditional land use by the eight communities of the area. Please respect the area by informing yourself before going. The following book helps plan a trek, identify routes, and name peaks during the trip (and includes several of my photos):

Climbs and Treks in the Cordillera Huayhuash of Peru by Jeremy Frimer Flexibound – 2005 [including 3 inside & 2 cover photos by Tom Dempsey].

The Cordillera Huayhuash challenged mountaineers in the gripping 2003 British docudrama “Touching the Void.” In 1985, climbers Joe Simpson and Simon Yates scaled the treacherous West Face of Siula Grande (20,800 feet / 6344 meters), one of the last unconquered faces in the Andes, but after Joe broke his leg, their descent became one of the most amazing survival stories in mountaineering history. The movie is based upon the harrowing book, “Touching the Void: The True Story of One Man’s Miraculous Survival

Weather forecast for Siula Grande (and other selectable peaks in the Peruvian Andes or worldwide): www.mountain-forecast.com/peaks/Siula-Grande

While Lake Titicaca (on the border with Bolivia) is an earlier and more important cradle of Andean civilizations, Cuzco Valley gave birth to the powerful Inca Empire. Peru’s greatest native legacy to the world is the potato plant, which is now a staple crop spread world wide. 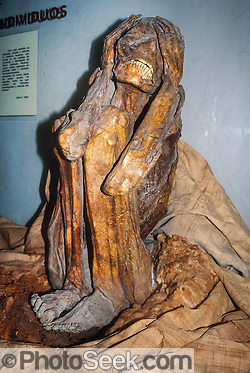 The Inca Empire and Spanish Conquest

Archeology suggests that in a 700-800 AD military expansion, the Wari people may have settled the Cuzco Valley and become the Inca’s ancestors. Quechua oral history says that the first Inca, Manco Capac, the son of the sun god (inti), founded the city of Cuzco in the 1100’s AD. After 1430 AD, the Incas burst out of Cuzco and quickly imposed their culture from southern Colombia to central Chile.

The Incas used their absolute rule and organizational genius to build vast terraces for growing food on the steep Andes mountains in a moderate climate, away from the dry desert coast and above the mosquito-filled Amazon Basin. The Incas developed textiles, pottery, metals, architecture, amazingly fitted rock walls, empire-wide roads, bridges, and irrigation, but never discovered the wheel, arch, or writing. Despite their amazing accomplishments, the Inca Empire lasted barely a century.

Over in Europe, Catholic Pope Alexander divided Africa and Brazil to Portugal, and gave the Americas to Spain. With Church approval, Spanish fortune hunters accompanied by priests sought riches in the Americas. With lucky timing, conquistador Francisco Pizarro arrived in 1532 at a moment that found the Incas vulnerable from a just-ended civil war. With just a few dozen conquistadors bringing superior weaponry, horses, and guile, Pizarro captured the Inca Emperor Atahualpa at Cajamarca. Despite receiving a fabulous a gold-filled room as ransom fulfillment, Pizarro soon killed Atahualpa. After realizing that the Spanish were here to stay, the successor Inca Emperor, Manco, met with fellow Inca chiefs at Lares in spring 1536 to plan a rebellion, raising an army of 100,000 to 200,000 to surround Cuzco against just 190 Spaniards (including 80 on horses). Despite vastly superior numbers, their clubs, spears, slingshots, and arrows were no match against armored and mounted Spanish Conquistadors brandishing steel swords. Manco Inca’s rebellion was ultimately unsuccessful, and he was forced to retreat to Vilcabamba in the Amazon jungle, where he was killed in 1544. In 1572, the Inca Tupac Amaru organized another rebellion, but was also defeated and executed by the Spaniards. The Spanish Conquest lasted 40 years, from the ambush of Inca Atahualpa at Cajamarca, to Tupac Amaru’s beheading.

Sadly, the near-socialistic support system of the Inca was now destroyed by the cruelty of feudal Europe. The “Indians” (now known as Andeans or campesinos) were now triply-exploited by 1) their native chief (curaca), 2) their Spanish governor (encomendero), and 3) their Spanish priest, who all exacted undue tribute payments. The Incas’ mita system of forced labor for the common good was misused by the Spanish for mining gold and silver for the Crown. Eventually the Spanish forced 80% of the former Inca Empire to work for tribute, mines, or textile mills, stopping just short of slavery. After the Spanish Conquest, Peru’s population declined from 7 million to 1.8 million due to disease, war, famine, culture shock, and demoralization.  Read The Conquest of the Incas, first published in 1970 by John Hemming, or the more recent The Last Days of the Incas (2008) by Kim MacQuarrie.

Today, despite turbulent politics, Peru makes a wonderful vacation. Allow one or two extra flex days in your schedule to handle delays in transportation due to frequent strikes.