Since the industrial revolution began in the 1750s, humans have increased atmospheric carbon dioxide concentration by 48% (from 280ppm to 415ppm as of 2021) through burning fossil fuels, deforesting land, and grazing livestock. The world’s climate scientists agree that human-caused carbon-compound gas emissions are accelerating global warming, rapidly melting glaciers, and raising ocean levels worldwide. Humans have forced a grand warming experiment affecting all life on earth, with unknown consequences. Climate change may be most dire for subsistence farming societies in Africa and Asia. Industrialized nations have the riches and resources to adapt, if they can overcome political barriers and immigration instabilities.

Industrial nations must quickly replace fossil fuels with solar, wind, hydroelectric, and other renewable energy sources that are carbon neutral. Nuclear energy would be a good solution except for its serious problems with safety and long-term storage of radioactive waste. For example, Japan’s tragic 2011 Tohoku earthquake and tsunami caused expensive nuclear plant meltdowns, forcing long-term evacuations of hundreds of thousands of residents. 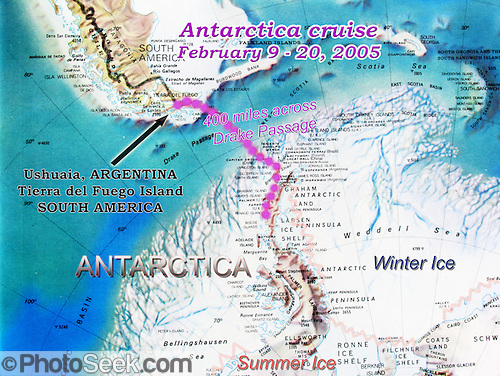 Two-thirds of the planet’s freshwater is frozen in Antarctica. Surprisingly, Antarctica is actually a desert in terms of annual precipitation — only 200 mm (8 inches) along the coast and much less inland. Warming deep ocean waters just off Antarctica’s continental shelf may be the biggest threat: if floating Antarctic ice shelves melt too fast over the sea, the pressure of land-based feeder glaciers will send extra ice to melt, thereby accelerating global sea level rise. The extra ice that flows off and melts from Antarctic land will be partly offset by increased snowfall over Antarctica expected as warming climate evaporates extra moisture into Antarctic air masses. Climate scientists are feverishly studying these complex questions: