Norway offers beauty around every corner, from fjordland to Nordland. Norway, home of the Nobel Peace Prize, is a model world citizen respecting both people and the natural world. Tortured terrain, turbulent history, cold winters and brief summers evolved hardy Vikings and modern Norwegians who live close to the land. In fact they tunnel right through it. One day we drove 30 tunnels, one as long as 7 miles!

Carol and I enjoyed a rental car tour of Norway July 21-August 13, 2011. Our favorite town was Reine in northern Norway, visited July 22-28. Based on fond memories from 1981, we joined DNT (Norwegian Trekking Association) to get a discount on mountain lodges, but ended up day hiking everywhere and sleeping in more economical private campground cabins with kitchens ($80-$100 per night), plus some Bed & Breakfasts and hotels ($125-$210 night double). Supermarket food cost double or triple that of Seattle, and restaurants cost triple to quadruple. At AutoEurope.com, car rental was $84 per day for 17 days from Oslo (OSL Gardermoen Airport) and $108 per day for 5 days from Evenes Airport (EVE) in Nordland County. Norway also has an excellent public bus and train system. Read my separate article:

Roads starting from sea level must negotiate three to six thousand feet up steep cliffs to reach the central plateau that forms most of Norway. Deep seawater stretches inland through the Scandinavian Mountain Range as far as 125 miles at Sognefjord. If unraveled, the fjord-pierced coastline would stretch for 21,000 miles. “The sea unites, but the land divides.” Since Viking times (about 800 to 1000 AD), boats have linked remote coastal towns. Impenetrable terrain resisted roads, railways and communication lines until North Sea oil was discovered. Oil helps pay for impressive bridges, tunnels, rails and generous social support (long maternity/paternity leaves, free education including college, retirement Pension Fund for all). Norway has 5 million people in an area 20% smaller than California.

Despite its high latitude, Norway’s climate is relatively mild. The North Atlantic Drift, partly fed by America’s warm Gulf Stream, keeps fjords ice-free in winter as far north as Hammerfest, at 71° North latitude (icy Alaska’s northerly tip). Two out of three days are cloudy in summer, surrounding the peaks and plateaus with mysterious mists, until every third day when sun shines glory upon the glacier-carved mountains. Norwegians pioneered the study of weather because their home gets so much of it!

Stave Church images include Heddal, Eidsborg, Borgund, Lom, and Urnes. Stave refers to the load-bearing posts which support interior beams. The state Church of Norway (Den norske kirke in Bokmål or Den norske kyrkja in Nynorsk) was established after the Lutheran reformation in Denmark-Norway in 1536-1537 broke ties to the Holy See of the Roman Catholic Church. When driving from Oslo to Heddal to Lysefjord, tour the Rygnestadtunet farm museum which dates from 1590 AD in Valle municipality, Setesdal, Aust-Agder. See the Hardanger Folk Museum in Utne to learn of fiddles, lacework, and the national costume. 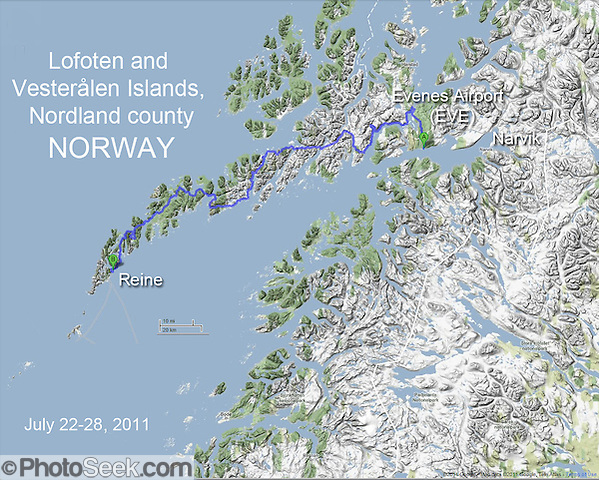 Above map: Rent a car at Evenes Airport (EVE) and drive round trip to our favorite town of Reine in northern Norway. July 22-28, 2011.

The “Norwegian traditional district” known as Lofoten is a beautiful archipelago of islands above the Arctic Circle in the county of Nordland.

Explore the scenic towns of Svolvaer, Stamsund, Nusfjord, Hamnøy, Sakrisøy, Reine, and Å. Admire vistas of Torsfjorden and Selfjorden. Above Reine village, ascend a harrowingly steep trail to Reinebringen for spectacular views of sharply glaciated peaks surrounding Reinefjord, on Moskenesøya (the Moskenes Island). Take a passenger ferry on scenic Reinefjord to Vindstad for a fun and easy walk to Bunes Beach.

Lodging is tight in Reine at the most spectacular end of the Lofoten islands. Reserve rooms or rorbus 3 months in advance. No problem sleeping in a tent or camper. 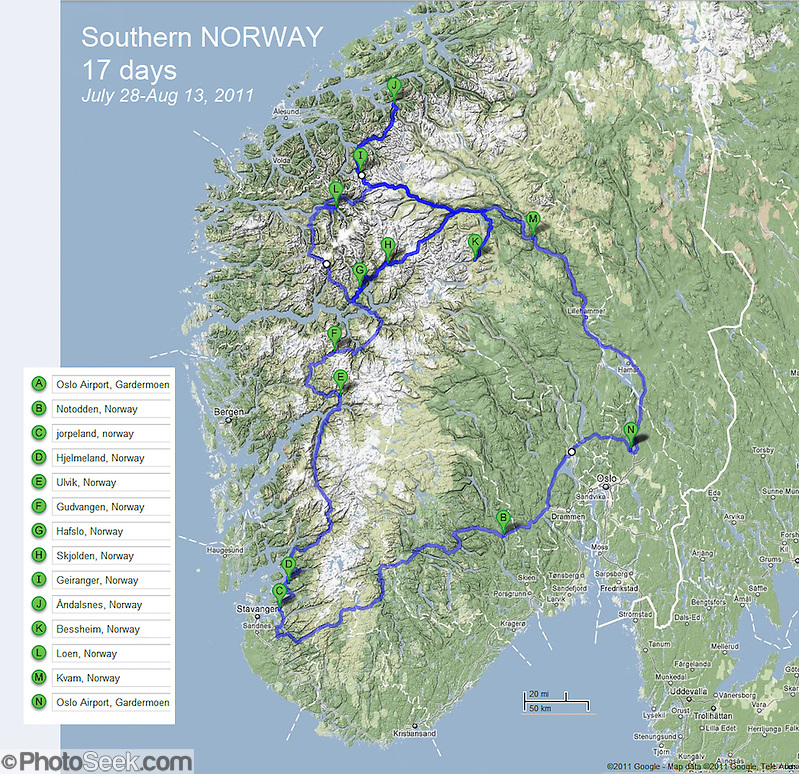 Jotunheimen mountains, “The Home of the Giants”

Memorable hiking in the Jotunheim mountains (Jotunheimen or “The Home of the Giants”) includes: the mountain ridge of Besseggen (or Besseggi), Lake Gjende, Knutshøe ridge, Fannaråken mountain (or Fannaråki), Store Styggedalstind, and the Hurrungane range.

Almost all inland glaciers in Norway have retreated since 1900. After many Norwegian glaciers temporarily advanced from heavy winter snow in the 1990s, according to the Norwegian Water Resources and Energy Directorate (the most extensive national glacier monitoring program in the world), twenty-five monitored glaciers retreated an average of 190 meters (3% of their total length) from 2000 to 2010. Read more about global warming and climate change.