A higher-quality image can be printed bigger than a blurrier one. But maximum print size is subjective, depending upon your viewing distance and acuity standards. Surprisingly, a giant billboard along a highway can be printed from a 3-megapixel camera!

I’ve found that a good 8 or 10 megapixel camera made back in 2007 can create images for prints perceived as sharp when viewed at a distance equal to the print’s longer dimension (or further away). For example, a 30- by 20-inch print from an 8-megapixel DSLR camera can look acceptably sharp when viewed at about 30 inches. As of 2017, midsize cameras having 20 to 24 megapixels can make well-shot 30-inch prints that look sharp at about 18 inches away.

Based upon a 9-megapixel scan from 35mm film, my jagged rock pattern enlarged impressively onto a 64-foot-wide lightbox on a Calgary skyscraper! 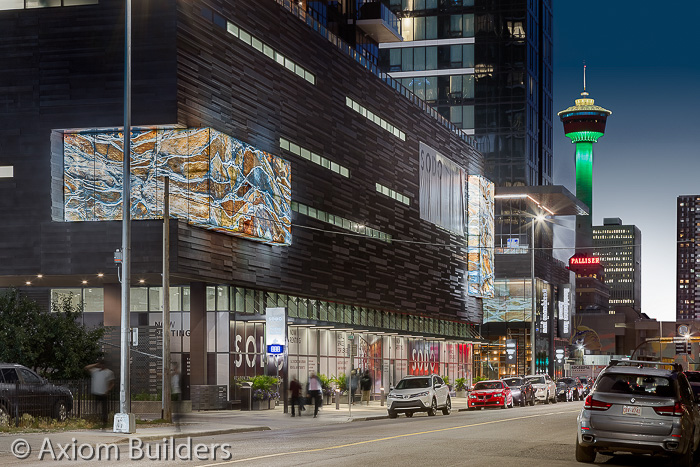 In general, for a good shot on a 3+ megapixel camera, maximum print size is unlimited when viewed from about twice the print’s longer dimension away (or further). Further below are subjective sharpness formulas suggested for determining optimal viewing distance and corresponding maximum print size.

Your angle of view most affects how sharp a print looks. Here’s how a small print can look just as sharp as a large billboard:

Sharpness and “maximum print size” are subjective, dependent upon many factors which influence image quality:

Because most prints are viewed at a distance of at least 15 inches, printing a camera’s native pixels at 240 Pixels Per Inch (PPI) appears sufficiently sharp for most people (or somewhere between 180 and 300 PPI).

The following subjective viewing-distance formula for human eye acuity is for well-printed images, from any modern high-quality camera of any megapixel specification (preferably with 1-inch Type sensor or larger):

This formula is subjective, meaning your judgment of image sharpness may differ from mine. Adjust your preferred optimal PPI as needed to customize this formula.

For best prints of up to 48 inches on an ink jet printer, resize the file’s resolution in the range of 240 to 300 PPI (pixels per inch), at your desired length and width. This optimizes the print for the acuity of typical human eyes at common viewing distances, such as for small handheld prints, and also for large prints on a wall viewed a step or two away. Adobe Photoshop’s “bicubic” resizing works great; or use Adobe Lightroom.

If more than doubling a dimension in Photoshop, resize the image in steps to avoid introducing imperfections. For example, to increase an image from 16 inches high to 48 inches, resize height to 32 inches first, then resize again to 48. Maintain image proportion of height to width. After resizing, sharpening (such as Unsharp mask) is the last step before printing, to optimize human perception of edges.

Seeing is believing. Compare images from two cameras side by side using 100% pixel view at

For better quality images, buy the latest-model camera (read Tom’s recommendations). I prefer a camera with a larger diameter lens and physically larger sensor which is better optimized than its competitors, as judged when 100% pixel views are compared at ISO 800 or higher.

Back in 2007, sensor designs exceeding about 6 to 8 megapixels in small cameras (subcompacts less than 10 ounces) usually didn’t help increase effective print size, due to hardware limitations of tiny lenses and sensors at that time. But by 2016, technological leaps allowed a 16mp sensor in a little Samsung S6/S7 smartphone to make good 18-inch prints! In this example, upgrading to the latest model pays off handsomely.

In an impressive 2016 feat of miniaturization, daylit-image quality from the pocketable 20-megapixel Panasonic LUMIX ZS100 camera (buy at Amazon)

Historical camera comparison from year 2012: Based on review sites dpreview.com and imaging-resource.com, I rate the following travel cameras on ISO 400 quality, starting with best first, and worst last, with roughly equivalent cameras connected by slash / marks:

Look up the LPH for cameras, sometimes reported on dpreview.com: resolvable lines per picture height (sometimes abbreviated LPPH). A camera with higher LPH can make sharper large prints. LPH is a good empirical measure of real resolution of a camera’s sensor for a given lens (independent of pixel pitch or megapixel count). dpreview.com reports the absolute vertical LPH judged by photographing a PIMA/ISO 12233 camera resolution test chart under standardized lighting conditions. Note which lens and camera body was used in each test, and compare with others within the same web site.