Driving the scenic Oregon coast cured our Seattle winter blues, February 7-11, 2021. Designed for summer throngs, Highway 101’s many spacious campgrounds were thankfully uncrowded, despite some being closed for winter. We could relax, with no reservations! A downside of the wet season was deep mud on the longer trails, restricting hikes to well-established viewpoint paths. But to our delight as we parked in Ecola State Park, a herd of Roosevelt elk ambled by, grazing against a backdrop of Cannon Beach’s iconic sea stacks! 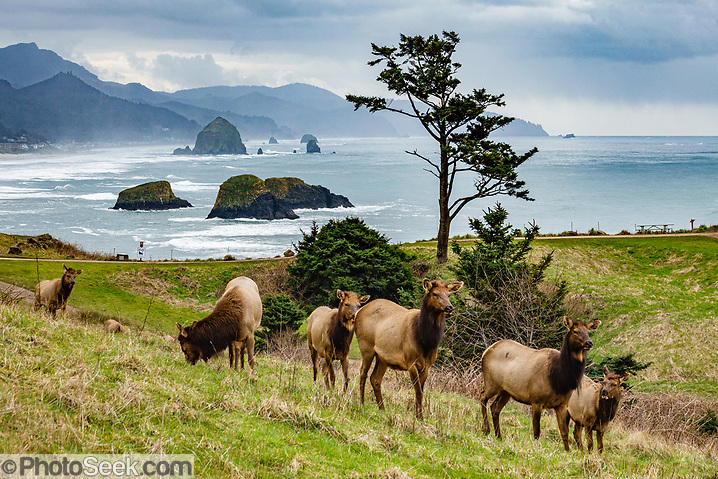 Above: Roosevelt elk (Cervus canadensis roosevelti) graze in winter at Ecola State Park, on the Oregon coast. Behind the elk, various sea stacks rise from the Pacific Ocean, including nearby Bird Rocks and Haystack Rock offshore from Cannon Beach.

This Google Map of western Oregon shows our route from north to south:

The above map’s waypoints include the following sights covered in this article:

Highlights from the Oregon coast in winter

We especially enjoyed walking trails and beaches around Fort Stevens State Park, which has a huge campground, with more yurts than I’ve ever seen! The campground was nearly deserted on a Sunday evening in February. 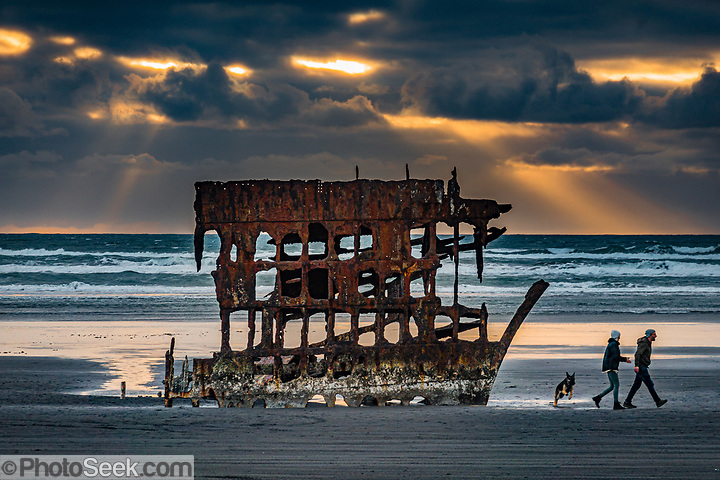 In 1906, the crew of the sailing ship Peter Iredale took refuge at Fort Stevens, after she ran aground on Clatsop Spit. The wreck is visible today, within Fort Stevens State Park, along the Oregon Coast, USA. (© Tom Dempsey / PhotoSeek.com) 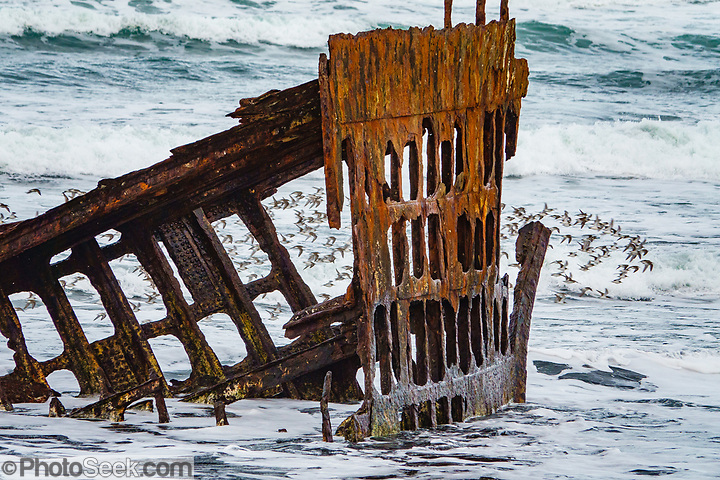 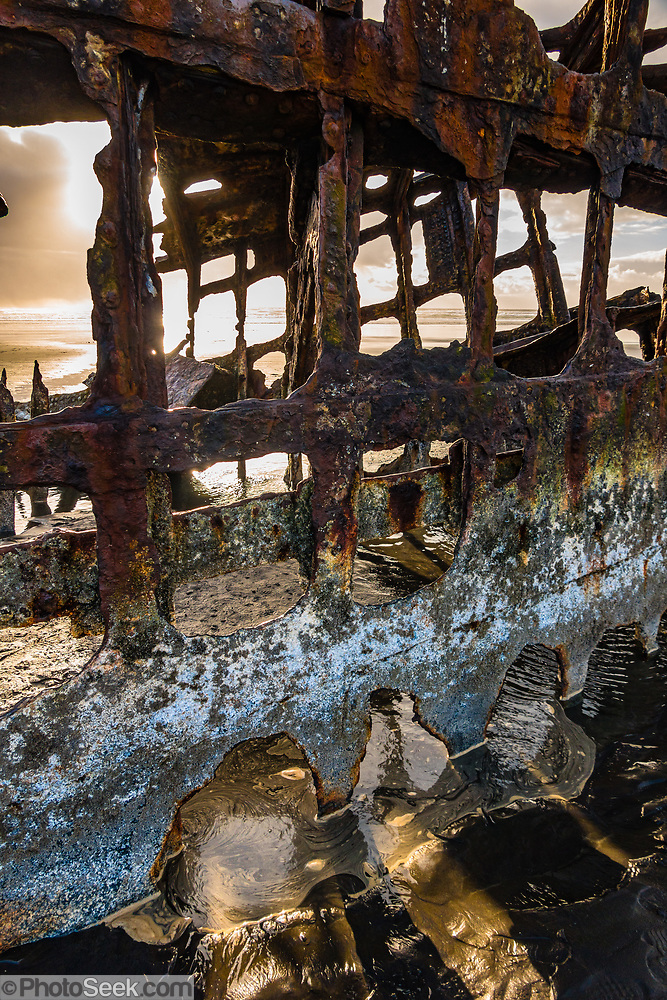 The image below is from inside Battery Russell Lower Ammunition Bunker and Quarters at Fort Stevens State Park: 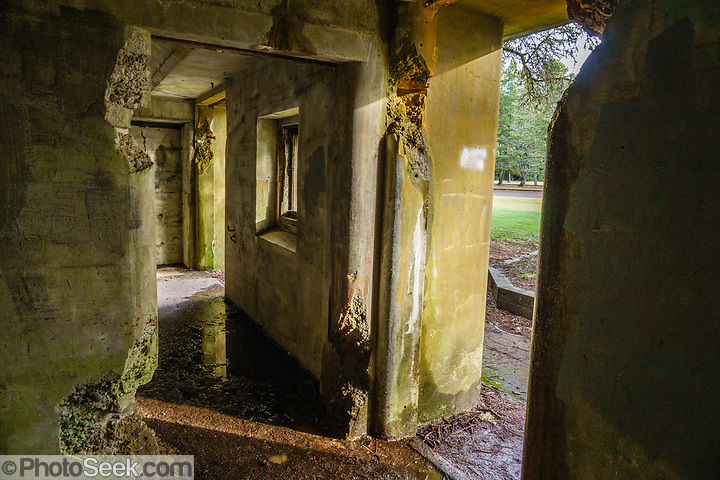 Fort Stevens operated from 1863–1947 as part of a 3-fort system defending the Columbia River Mouth. Built near the end of the American Civil War, this American military installation was named for a slain Civil War general and former Washington Territory governor, Isaac I. Stevens. In June 1942 during World War II, a Japanese submarine fired 17 rounds upon Fort Stevens (luckily causing causing no real damage), making it the only military base on the Continental United States to be fired upon by an enemy since the War of 1812.

Driving further south to Cannon Beach village, views are most impressive from Ecola State Park’s trails (see the first photo in this article). The Indian Beach trail was very scenic as far as the outlook to Sea Lion Rock, but thereafter 6-inch deep mud turned us back. Hiking onwards on the Coast Trail would be best left for a drier week or season. 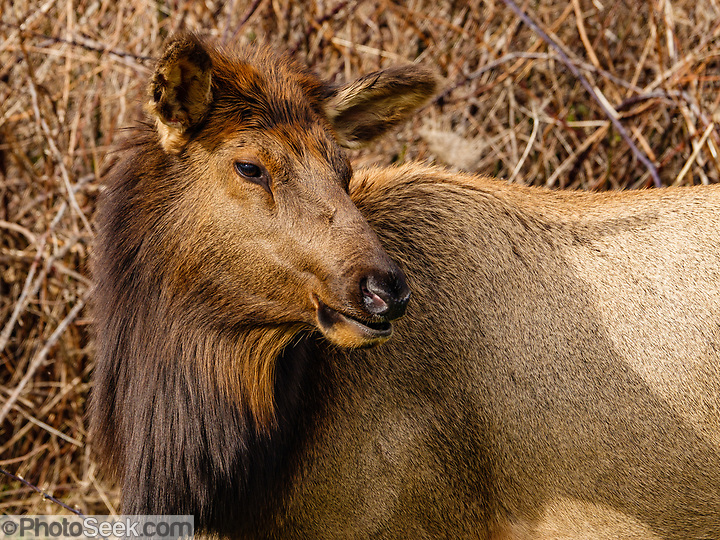 Above: Roosevelt elk (Cervus canadensis roosevelti), Ecola State Park. Please don’t feed or approach the wild elk. Instead, let them graze in peace. A tourist leashed to a barking dog blithely approached too close to a female elk, which then protected itself with a false charge. The man and dog wisely retreated in fear! As a young woman tried to pet another elk, I warned her not to approach the large, unpredictable beast.

At the nearby empty Sea Ranch RV Park, we checked into the prettiest site along tidal Ecola Creek within popular Cannon Beach village. Very quiet during off-season, the resort town is a delight to explore on foot, including its beach and Haystack Rock. (Tolovana Beach State Recreation Site offers parking Haystack Rock and its beach.) 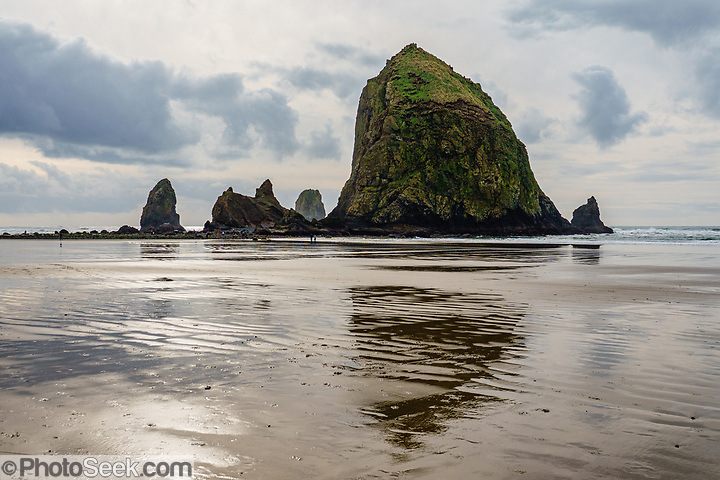 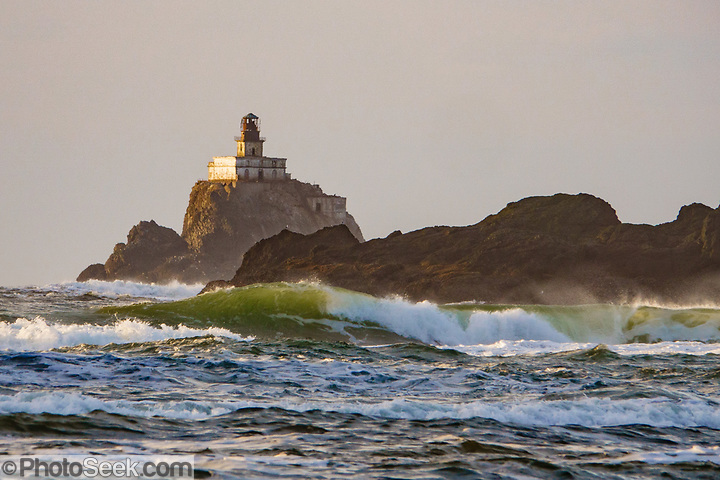 Below: Bird Rocks and sea stacks seen from Chapman Beach, just north of Ecola Creek, the biggest stream running through the town of Cannon Beach. 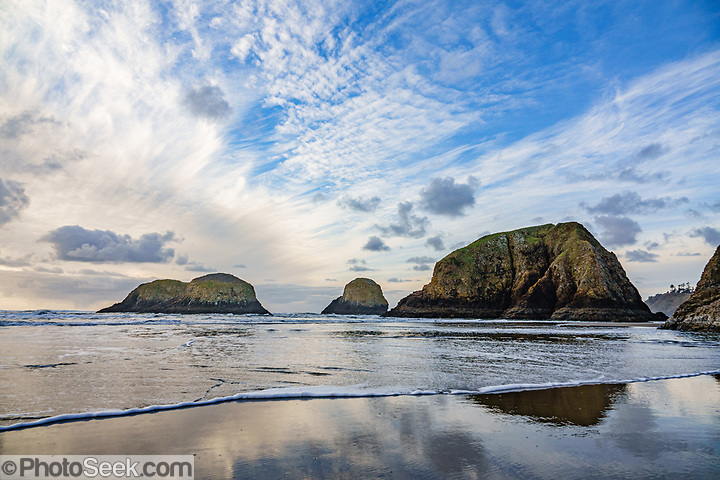 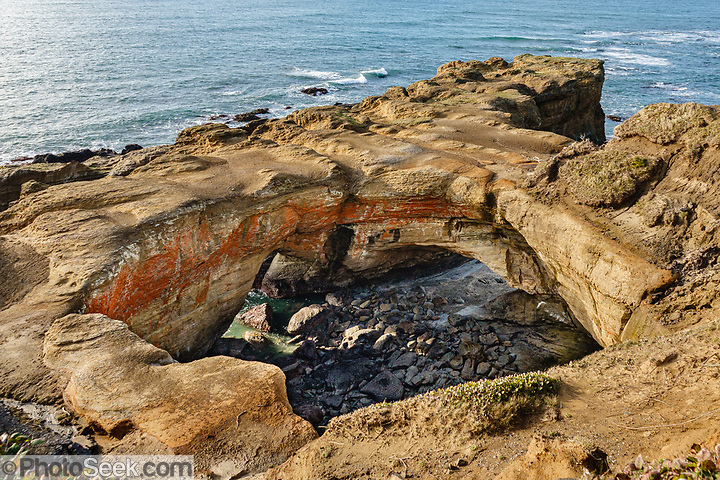 Below: A couple admires sunset at Beverly Beach State Park Campground, where we stayed the night before visiting Newport’s excellent Oregon Coast Aquarium. 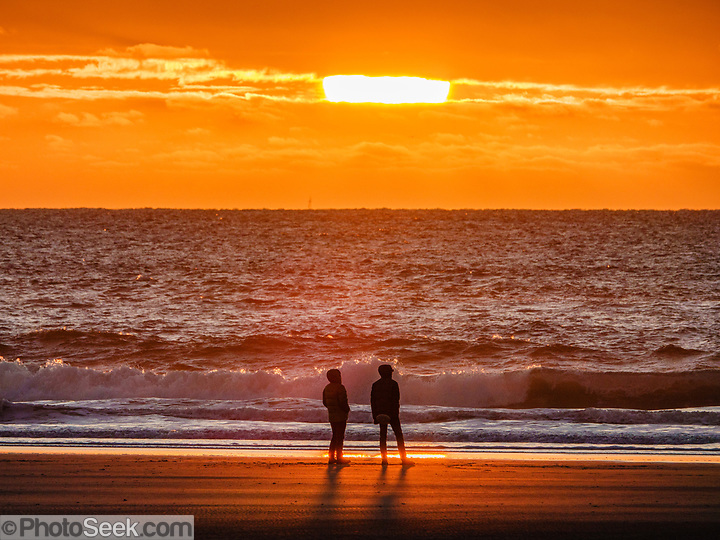 Below: The top reason we returned to Newport’s Oregon Coast Aquarium (previously visited in 2008) was to reexperience the tank of beautiful yellow-orange Pacific sea nettles swimming hypnotically against a blue background. 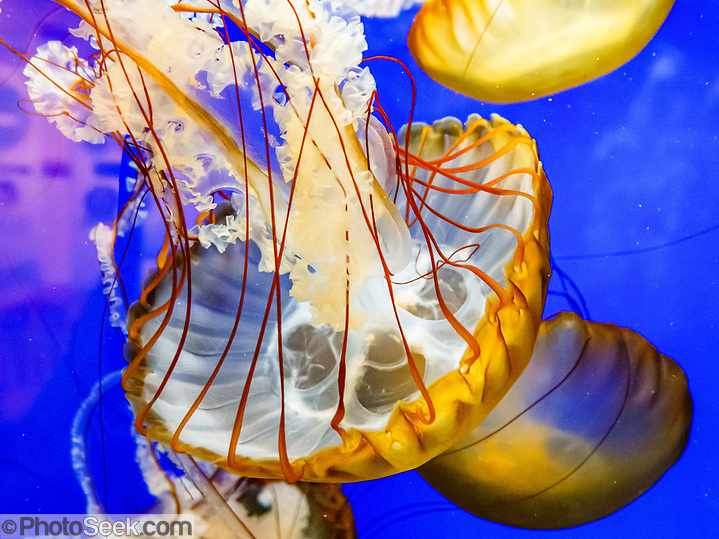 Below: A Tufted Puffin at Oregon Coast Aquarium, in Newport. 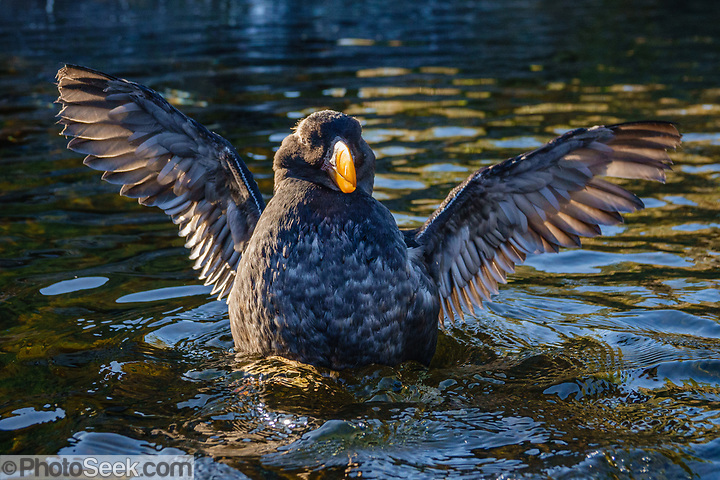 Below: Sea anemones and other sealife at Oregon Coast Aquarium. 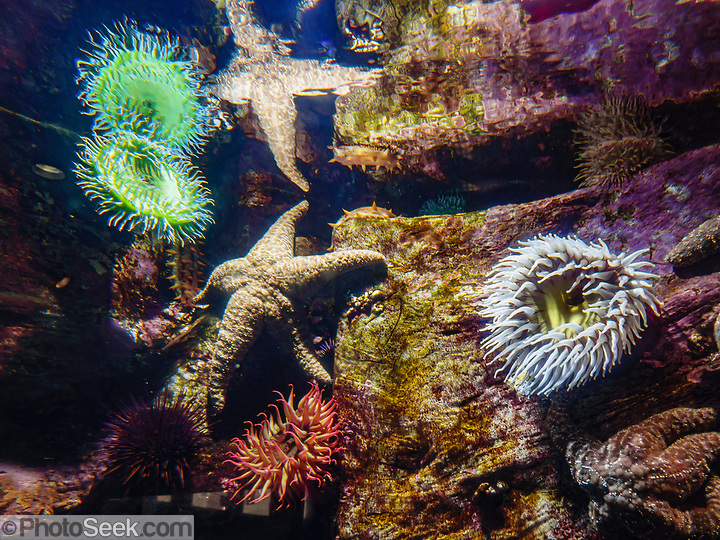 Below: A Green Moray Eel (Gymnothorax funebris) emerges from a pipe at the Oregon Coast Aquarium, in Newport, Oregon, USA. While it may look neon green, the skin of the otherwise brown eel actually secretes a yellow-tinted layer of protective, toxic mucus. Moray eels are the only fish (and the only vertebrates) with mobile pharyngeal jaws, an extraordinary hunting innovation where outer jaws firmly grasp the prey, then separate inner jaws within the throat shoot forward to bite the target and pull it in! 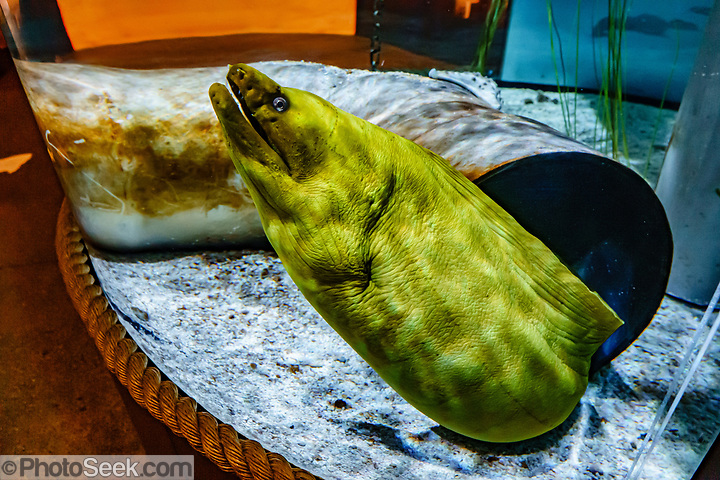 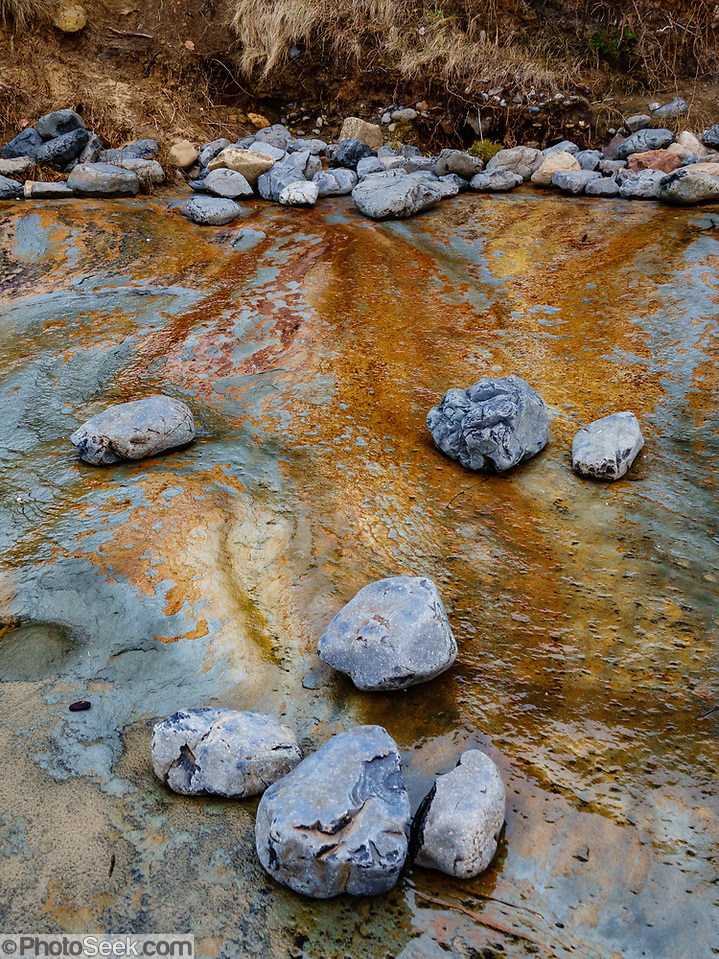 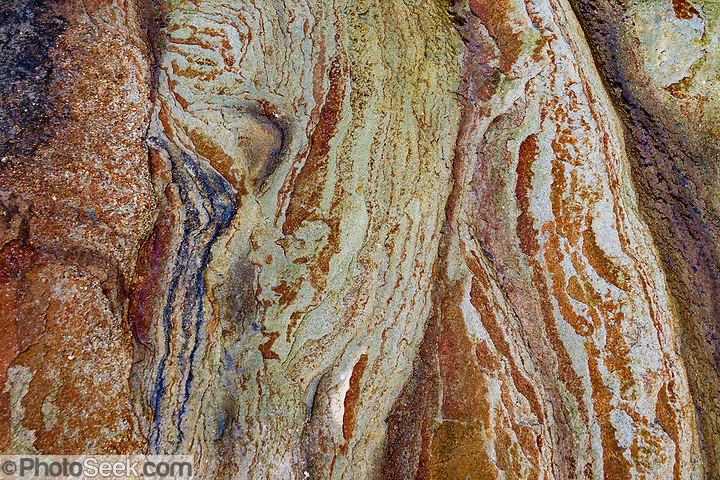 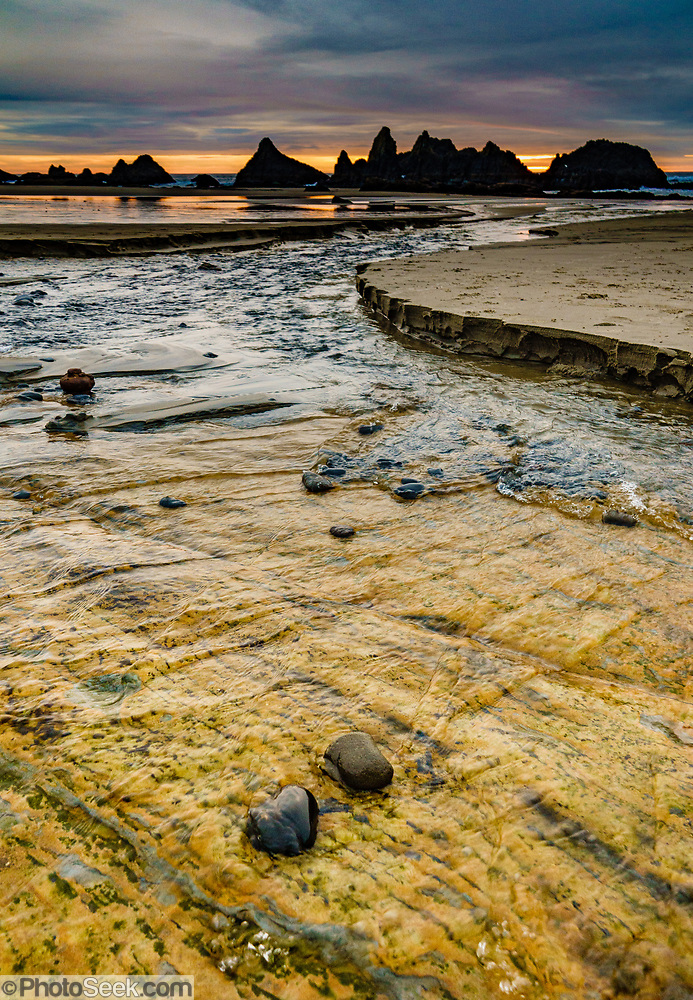 Images above and below: Sunset over Hill Creek, a stone’s throw south of Seal Rock State Recreation Site. 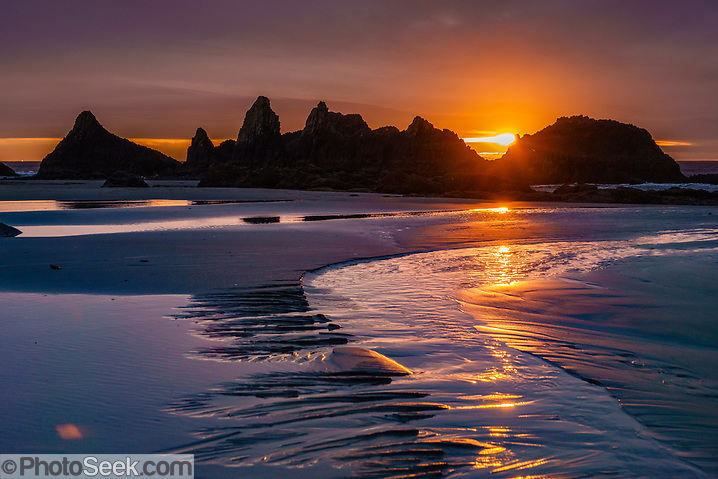 Above: Sunset behind sea stacks reflects in Hill Creek near Seal Rock State Recreation Site, on the Oregon coast.

We stayed at the adjacent Seal Rocks RV Cove on our last night on the coast, then boogied back to Seattle the next day, before a foot of snow fell and isolated our street!

Earlier that day, we had visited the following destinations further south: 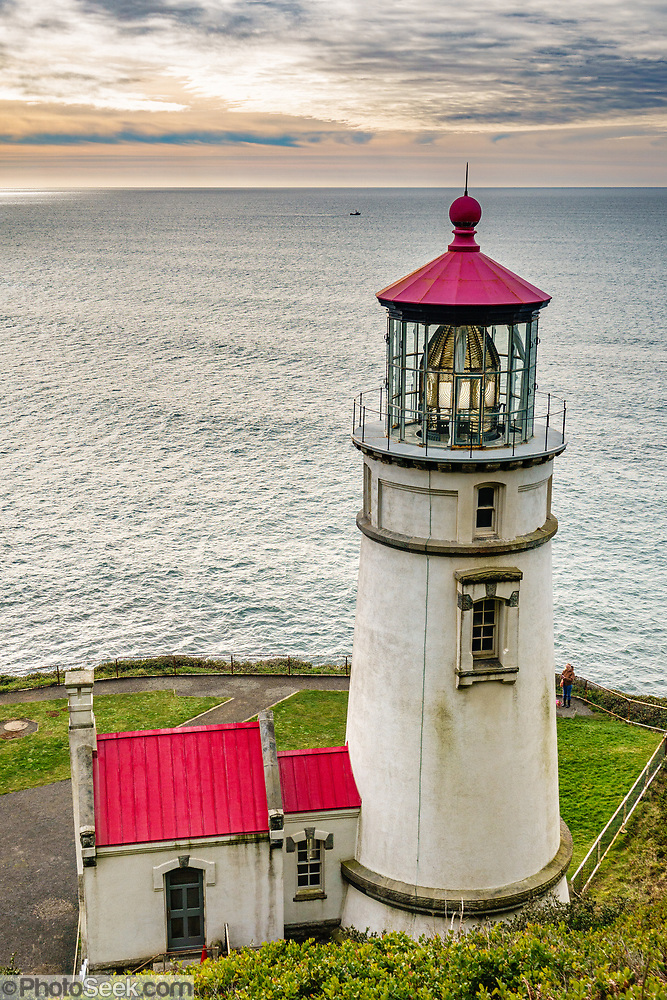 Above: Built in 1893, Heceta Head Lightstation is a short walk from the parking lot on a beautiful remote bay. Don’t miss the side trail that switchbacks to views like this just above the Lighthouse tower. Walking further upwards leads to an impressive view of Hobbit Beach, which is reachable by continuing further to the northeast on the same trail.

A weather warning caused us to retreat back to Seattle before a foot of snow would fall to block our street, cutting the trip from 6 days to 5. On that missed day, we would have sought the following Oregon coast highlights further south (which I photographed in February 2012):

Index of my Oregon articles:

Click “i” to read descriptive Captions. Click the dotted square to scroll a set of thumbnail images. Add any of the above images to your shopping Cart at this link: Feb 2021 Oregon images in my Portfolio.