Are you looking for a great camera having an APS-C-size sensor? The best, most-portable APS-C camera can capture quick sports action and subjects in dim light with fast autofocus: Sony Alpha A6300 camera (buy at Amazon with 16-50mm lens)

However, a smaller 1-inch-Type BSI sensor can now equal or beat virtually every advantage of APS-C cameras (which at best have no more than 5% advantage in real resolution or maximum print size). Compared to Sony’s RX10 III camera (read my review) which has an amazingly bright 25x zoom lens and more advanced stacked backside illumination (BSI) sensor, both Sony’s A6300 and A6000 now demand only the sharpest zoom or prime lenses to justify their APS-C sensor, such as: 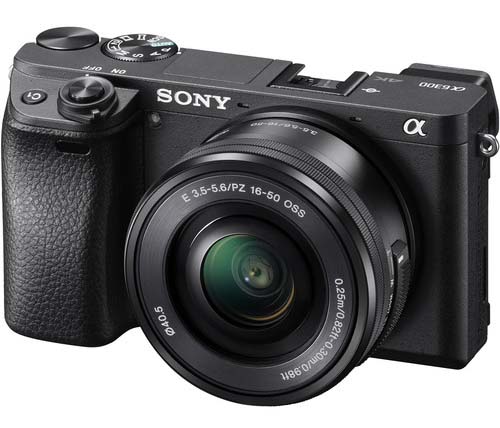 In order to equal or beat RX10 III, owners of a Sony A6300 or A6000 may need one of the following hefty, pricey Sony FE Series (full-frame) lenses:

Clearly, Sony’s A6300 & A6000 are now outgunned for outdoor travel photographers, as Sony Cyber-shot DSC-RX10 III camera (buy at Amazon)

packs the ultimate all-in-one travel tool into just 37 ounces. The RX10’s weather-sealed, bright f/2.4-4 lens (72mm filter diameter) with remarkable 25x zoom is sharp across the frame from 24-600mm equivalent, well into birding territory (read my Telephoto article). With the latest 1”-Type stacked BSI sensor, RX10 captures great depth-of-field details, everywhere from close flower shots to distant bird feathers. In my testing, RX10 III clearly beats the 11x SEL18200 lens (62mm filter diameter) on flagship APS-C Sony A6300 anywhere above 90mm+ equivalent telephoto, even as high as ISO 6400, due to the faster lens and BSI technology compensating for sensor size difference. At wider angles, 27-80mm equivalent, they capture similar quality in bright outdoor light — but in dim or indoor light, A6300’s larger sensor can sometimes resolve more detail on SEL18200. The sharper zoom SEL1670Z is only about 5% better than RX10 in bright light, and no better in dim light.

Conclusion: Among APS-C sensor cameras, Sony A6300 is my pick for top quality and best value; but now the Sony RX10 III with a smaller 1-inch-Type BSI sensor, combined with superb 25x lens, is a much better value than APS-C for travel, sports or wildlife photography. To gain up to about 5% in real resolution over RX10 III, the Sony A6000/A6300/A6500 cameras require interchanging only the brightest, highest-quality lenses (such as pricey f/2.8 lenses, Sony FE 24-70mm or FE 70-200mm). Lesser-quality lenses on APS-C are now antiquated by the all-in-one Sony RX10 III camera.

Sony A6300 camera improves upon earlier A6000 as follows:

All these improvements in the A6300 come in a slightly heavier 14.3-ounce body weight (with battery & card; versus A6000’s 12.1 oz), still significantly lighter-weight than most DSLR-style cameras.

If you don’t need a viewfinder, a cheaper Sony A5100